I recently took on digitizing the 8mm films of my grandparents. My grandfather having made his career at Kodak, he was more predisposed to take and store a lot of memories during his life (more than 1 hundred 8mm films, at least the ones he kept). I hope the content of this article will help you to decide what’s the best approach in your case!

1. The options to digitize the 8mm films

In this article, I’ll mostly discuss how to digitize the films yourself with some amateur equipment.

But first, let’s list the possibilities to get the job done:

2. Should I digitize the 8mm films myself, or pay for the service?

You should do some calculations to determine if it’s more relevant to achieve the job by yourself or not. Some of the thinking is still relevant even if you haven’t much money, as it could save you some time.

Whatever you decide, starting with step 1/ may be a good idea considering the process can take weeks for one hundred films.

3. How to use a 8mm converter scanner

As you probably understood, we’re going to focus on the third option which is : use a scanner and digitize the films by yourself.

Warning : it’s a long and tedious process. However when you have dozens or hundreds of films to digitize, it’s the only affordable option. Depending on your country, paying a company to achieve the same job would cost 3k-12k€ for 100 hundred films (rough estimation as it mostly depends on the total duration). But you should quickly understand why, doing it yourself takes time, and some nerves.

But honestly, the overall result is quite enough for most people. And if you need better quality for some films, then you can hire a professional.

It’s a niche market, meaning there won’t be a lot of competitors. I won’t list all the brands as I couldn’t test and compare them. The one I bought and used is the « reflecta 8mm scanner », also known as « braun 8mm scanner » (same company, and 100% same scanner).

The price should range between 300-500€ for a new one, and half less for a second-hand one. Buying a new one doesn’t seem mandatory, but you should try it out before buying it (ask the vendor, and bring a film of yours). Note that it should be easy to sell it afterwards, then keep that in minds if you have a short budget. 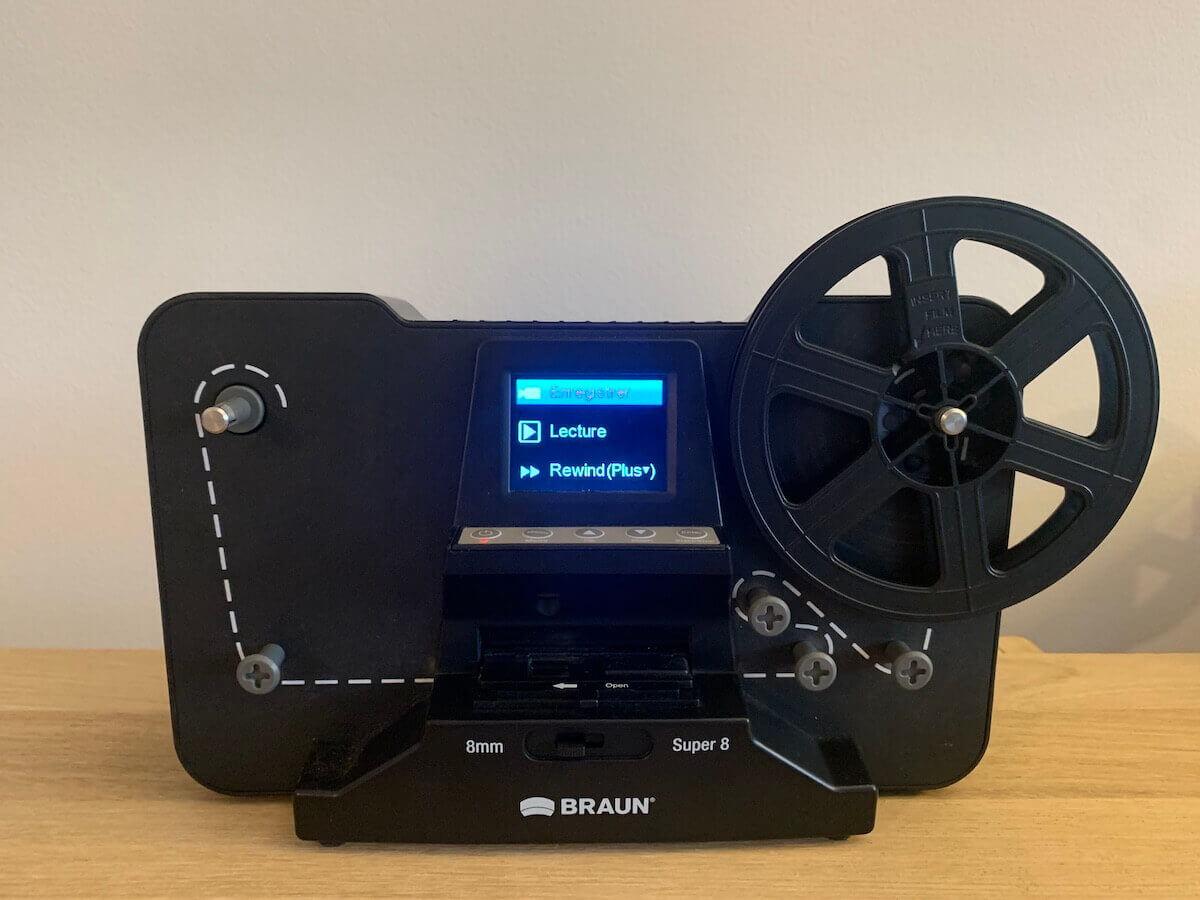 Photo of the Braun scanner for 8mm and super 8 films

If you’re lucky to find the « reflecta super 8 scanner », then go for it! It’s more expensive (and not on the market anymore?), but it allows to scan bigger reels (the 30 min ones). There is an alternative if you have some 30 min films to digitize, we’ll mention it later.

A regular 8mm film has 16 frames per second, and the Reflecta/Braun scanner converts 2 frames per second. So in theory it’s x9 the film duration. For instance, if your film is a 15 min one (~ 7,5 cm diameter), then it should take up to 135 minutes.

As a matter of consequence, if you have 25 hours of movies to convert, it should take almost 10 entire days, and so probably more like 1 month of work as all isn’t automated.

But do not fear! You’ll gain some valuable outputs from this.

There is a small learning curve, but then you easily jump from one to another.

Video digitized from 8mm film, then resized to 480x360 and compressed in h265.
Here the file is presented in webp.

From my experience, the output resolution of the video is exaggerated as a marketing aspect. I don’t think you can recover all the beauty of a 8mm film from this kind of equipment (meaning you need professional equipment for the best films). To simplify: you don’t need to store the videos in 1440 × 1080 px resolution. It takes ~1Go for a 10 min video, which seems excessive. 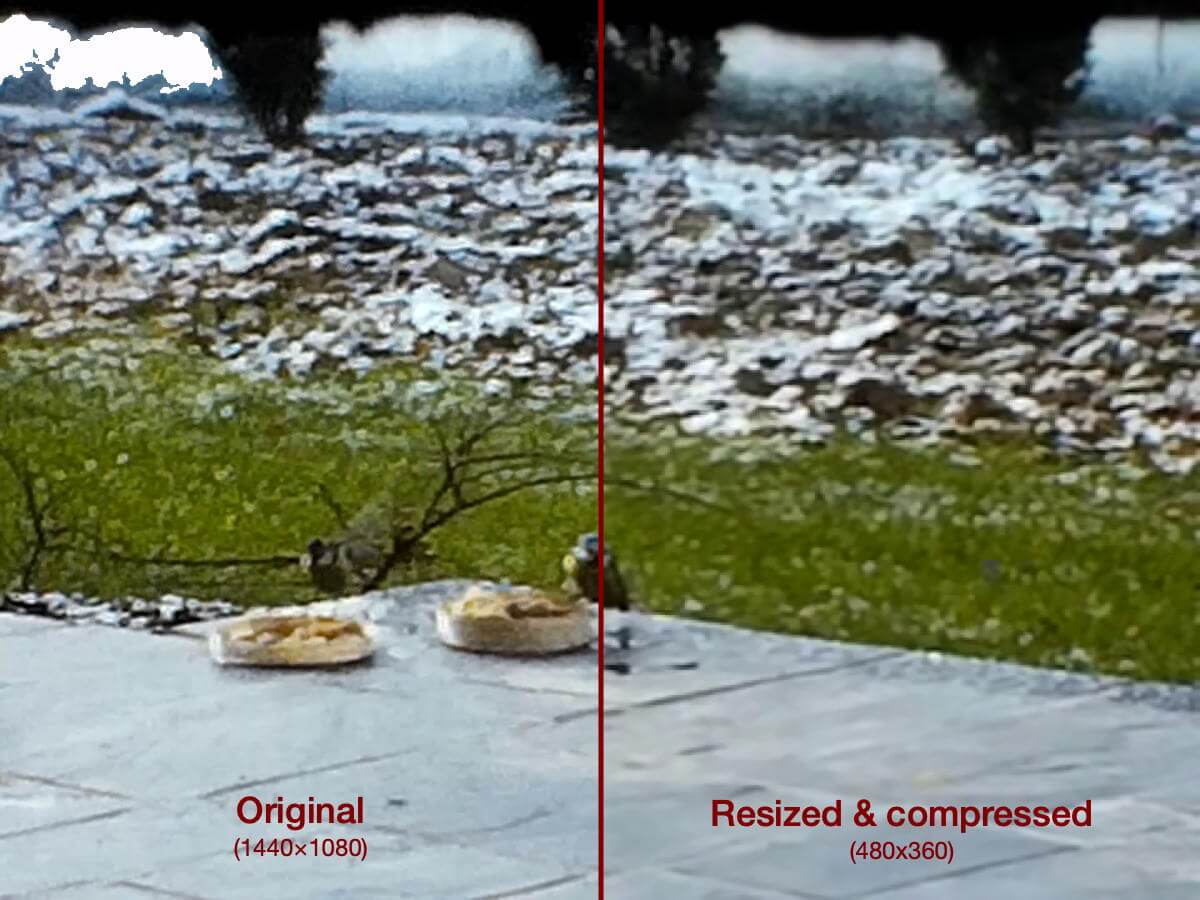 Example of quality between an orignal vs resized video

As you can see from the image above, there will be some quality loss. However it’s not much noticeable in the video itself and the size gain is worth the trouble if you store dozens of them.

Make sure to copy the videos before trying to compress them!. (As you probably already spent hours converting the films, so you don’t want to loose the originals yet).

Solution 1: If you are handy, you could build a small pole which would support the reel and allow it to turn (as the machine is doing the job to change the frames).
Solution 2: If you have a projector, then place it next to the machine (as in the photo below). 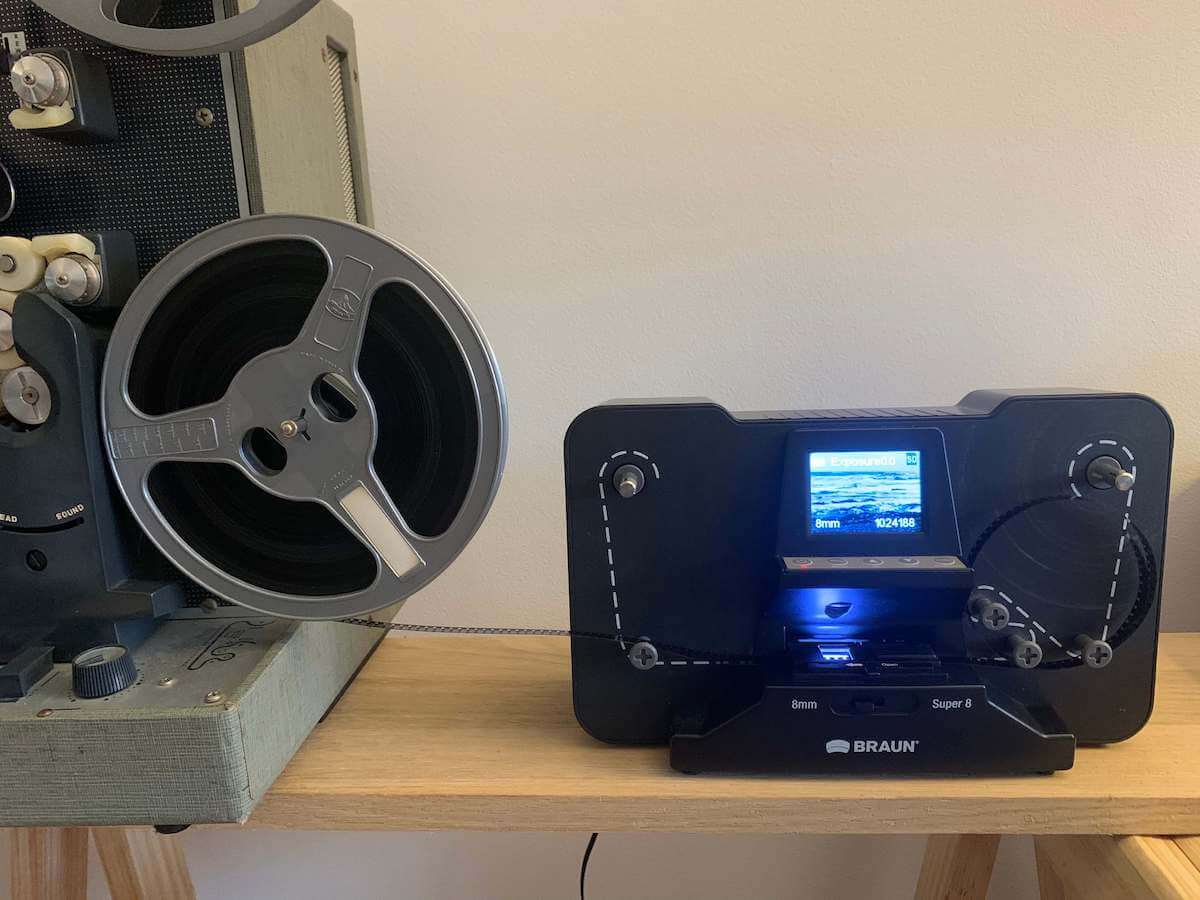 I hope this article was helpful to you.